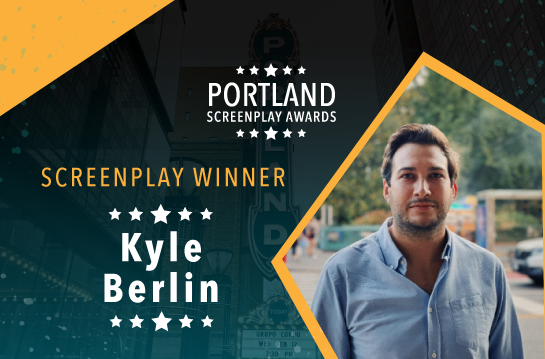 My name is Kyle Berlin, and I was born in a farmhouse in a little town called Montague, which is on the west coast of Lake Michigan. I mention this because the farmhouse itself, as well as the surrounding environs, served as the visual inspiration for ‘Dahlia’. I currently live in Brooklyn, and in addition to cooking Southern food (I worked as a chef in New Orleans for several years) I also love to play soccer and guitar.

Strangely enough, the script was the product of a conversation I had following a funeral in my hometown. (In some ways, I feel as if the origin story of this script is nearly a script in its own right: Struggling writer returns to hometown, connects with old friends, finds inspiration, writes breakthrough—sounds a little Hollywood, doesn’t it?) In any case, the mother of my best friend from childhood had passed away after a long bout with cancer, so a few members of the old gang gathered for the first time in over a decade. We’ve all gone on to creative careers: The bassist, Ben, is a comic/TV writer in L.A., and Matt, the drummer, is now a filmmaker. Over beers, Matt mentioned an idea for a short film he had, and that sparked a separate idea of my own.

When I returned home from the funeral, I felt the presence of the two central characters very strongly. I knew I wanted to set it—whatever ‘it’ was—in the farmhouse where I spent the first four years of my life, but I had no sense of the story. All I knew is that I didn’t want it to deal directly with my childhood in any way. (I had too much fun there as a kid!) I wrote a short version—about 15 pages—in 3-4 hours, and then Matt read 4 or 5 drafts of the short, providing notes along the way. Once we felt like the short was on solid ground, I made a push to write the feature over the course of about 3 weeks. From there, I made a few small changes and cuts, but 90-95% of what was submitted to the contest was basically what I set down during that short spurt.

Compared to my process previously, it was an extraordinarily compressed timeframe. The novel I had just finished took me three years—overall, ‘Dahlia’ took about a month. Unlike many screenwriters, I don’t use beat sheets or treatments or any ‘lead-in’ material—I just start writing. I understand the desire to make a story or concept first, but I believe in starting with strong characters and seeing where they want to go, rather than trying to force them to fit some predetermined storyline. Ultimately, it’s characters we remember, rather than plot, so that’s where I try to put my focus. It wasn’t until I was about 50-60 pages in, for instance, that I realized what the story was actually about. When I did, I had to laugh, because it was so simple and obvious. Generally, I’m pretty slow, in this sense. I don’t usually ‘know’ what I’m writing about until I get in there and start monkeying around.

In terms of process this time around, I wrote the draft for a short version over the course of a Sunday evening—it ended with the inciting incident for the larger feature. I returned to Michigan for vacation a few weeks later and wrote the entire feature there. While in Michigan, I also visited the farmhouse where I had grown up for a location scout. Many of the outbuildings and abandoned farmhouses in that area served as models for the script, but I also felt that it helped to be physically close to the setting while I was writing.

Um, basically when I started writing this script. I wrote a pretty terrible screenplay years and years ago in New Orleans, when I was first starting to make a go of it as a writer, but after that experience, I was pretty determined to stick to fiction. After all, you don’t need millions of dollars and a huge crew to make a novel! But after three years writing a book, writing a script was a welcome change of pace. I felt I could focus exclusively on dialogue, character, and story, rather than the myriad issues one must address while writing a novel. To give an analogy: All I had to do was draw the blueprint, whereas with a novel you have to actually build the house. One thing I learned during this process is that feature screenplays are really the equivalent of short stories, rather than novels. This may sound obvious, but you can only fit so much story in a feature. If you want to try something enormous—which I do, but not for this project—go for TV.

If I gave a real answer to this question, it would turn into a novel, but for this project, there were a few specific influences. In terms of setting, I thought a lot about the film White Material, by Claire Denis—her greens and browns, the secluded, dilapidated coffee plantation, the way the grassland and the gray-blue skies seem to be characters in their own right. And, of course, the determined, fearless, slightly unhinged heroine at the center, played by the incomparable Isabelle Huppert, was an influence on my own determined, fearless, slightly unhinged heroine.

For a combination of plot and setting, I also drew a lot of inspiration from Jane Campion, especially The Piano (grim, secluded setting plus thriller vibes) and the breathtaking rural New Zealand of the TV miniseries Top of the Lake, which reminded me quite a bit of where I grew up. In both places, there is this strange mixture of gorgeous lakefront with surprisingly little development and a strangely Pentecostal air of menace—an embarrassment of riches, in other words, for any thriller writer. Lastly, I’d be remiss if I didn’t mention Robert Eggers’ marvelously dark The Witch; in addition to being a great film, it’s also a brilliantly written screenplay. I’d highly recommend it for anyone wanting to see how it’s done.

A recent obsession is Ryusuke Hamaguchi’s ‘Happy Hour’, a five-and-a-half hour (!) film about a group of Japanese women in their thirties navigating life and love in Kobe. Someone (Tarkovsky?) said that if you hold a take long enough, there’s a point where you get bored, and then, if you hold the take, there’s a point where it gets interesting again—apparently, that goes for whole films, as well. ‘Happy Hour’ is one of the most quietly audacious films I’ve ever seen and takes these incredible risks by violating many of the tenets of modern cinematic expression, yet just becomes more and more absorbing as a result. In my opinion, it’s all in the writing. He’s a once-in-a-generation talent—maybe even better than that. I know I’m not the only one who can’t wait to see what he does next.

When I finally made it to the end of L’Avventura…because now I could say I’d seen L’Avventura.

Jep Gambardella, the star of Paolo Sorrentino’s hilariously decadent La Grande Bellezza. Jep is a writer who’s never at a loss for words, except on the page.

Welp, this is an easy one. Shakespeare! We’d probably start with a softball: “‘To be or not to be’—is that the question?”