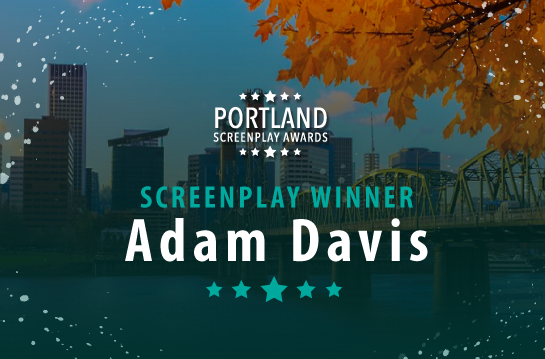 What’s your name? Where were you born? Where do you live? And what’s your hobby?
My name is Adam Elliott Davis. I was born in Portland, OR, and live in the area still. I have several hobbies, including exercise, drawing, music (guitar, singer/songwriter, and musical theater), snowboarding, and pretty much anything outdoors.

Where did you come up with the concept that just won the screenplay contest? How long did it take you to develop it into the screenplay it is now?
I came up with the seed of the idea for Sanguis on my honeymoon. My new wife and I were camping in NE Washinton, and as I was staring into the fire, I had the dark thought that it would be strange to arrive at a well-used campsite and find bones in the fire pit. I ruminated on the idea from there for about a year when the story finally came to me. I wrote the first draft of the feature in about three weeks, then developed it into its current state through several drafts and revisions over the course of about two years.

From concept to finished draft, can you take us through your screenwriting process?
My screenwriting process is relatively fluid, and varies from script to script. This one, for example, started with an image that I found unsettling, and came together once I discovered the elements of the story I wanted to tell over time. Other scripts might start from a genre that I enjoy, or a moral I wish to convey thematically, and I usually try to embed these elements into a sense of either irony or tragedy. A lot of my time is spent simply thinking about the story until I “crack it,” and then I write out the beats (as an exercise to make sure I understand where I’m going, not always for rigid structure), write the story out in prose, and then adapt the prose to script-format. From there, I tweak and adjust and fiddle until I like the beats and structure, and the story is something I’d like to watch. These practices sometime occur in tandem, sometimes, in different orders, sometimes not at all—every story is its own creature, and lives its own life cycle.

When did you realize that you wanted to become a screenwriter?
I’ve been writing since I was young. I started with poetry and remain obsessed with complicated rhymes, then moved into longform fiction in my late teens (I completed a ‘novel’ when I was 19—I would love to turn it into a film one day, but it needs an overhaul), and finally into screenwriting in my early 20s. I’ve been screenwriting for more than ten years, and find that it reflects my mind’s way of processing stories most closely, and combines my favorite artforms (music/audio, visual, language/narrative) into what I consider to be the pinnacle artform (cinema) as the end result.

Who are your biggest filmmaking/screenwriting influences? What about their style do you like or borrow?
My favorite screenwriters are Christopher Nolan and Martin Scorsese, whose work I don’t attempt to replicate, but am inspired by for the sake that they create their own heuristics and genres, and aren’t afraid to deviate. I particularly resonate with Scorsese’s use of iconography, and appreciate the boldness with which he explores religious ideas. I also am in awe of Nolan’s exploration of scientific concepts in a realistic way. My perfect screenplay would be a combination of these elements, and I’ve probably already started it.
Have you ever been obsessed with a movie or TV show? If so, which one? Why?
I’m obsessed with good stories with excellent execution. I’ve devoured things like Breaking Bad and the Dark Knight trilogy, Fight Club, and Melancholia. I love “weird art films,” and love a film with interesting language, and a more vulnerable perspective on humanity: Upstream Color (Shane Carruth) and Antichrist (Lars von Trier) come to mind. The Harry Potter series is a regular favorite at our house. I love a good blockbuster film, but my heart is with the indies. The Witch, The Joker, Bronson, and Ex Machina are recent favorites.

What’s your favorite moment in cinema history? Why?
My favorite moment in cinema history is probably the moment digital video became viable. This opened up an entire industry of cinema that was never available before, and reignited the artisanal craft of filmmaking. While celluloid will always be the gold standard for cinematography, I think digital video facilitated the incorporation of the best voices and storytellers on the planet into the limelight. It allowed the entire artform to be elevated, and granted access to all.

Who’s your favorite character in cinema history? Why?
I don’t think I can select one favorite character from cinema history, but I can offer a short list: Randle Patrick McMuprhy from One Flew Over the Cuckoo’s Nest, Karl Childers from Sling Blade, Heath Ledger’s Joker, or Arthur Fleck from The Joker. The common thread here, of course, is that these are all deeply troubled men with real problems, and the performances convey a psychological reality and emotional depth that is exceedingly rare in acting. My favorite experience as an audience member, to see in a performance, is the reality of psychology, no matter how ugly and disturbing it might be. There are more performances along these lines, but these four stand out to me.