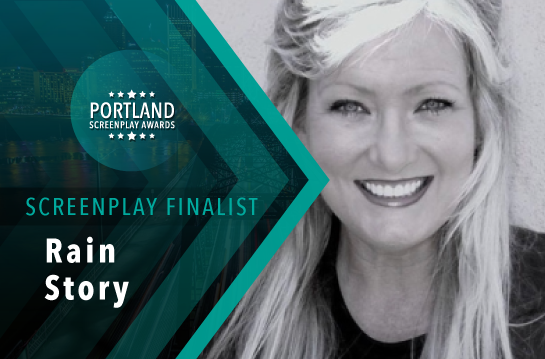 My name is Rain Story. I grew up in Arkansas, but now based in Los Angeles and the great Northwest. My hobbies are playing with my dogs, taking long walks, cooking, reading, and gardening. How do you pick just one? 

The concept for Guns & God: Lines in the Sand developed from a 2012 visit with family in Arkansas. Family friends arrived, preparing for a gun rally in Little Rock.

I grew up in the gun culture, so I understood its traditions and values. There wasn’t anyone who was going to take their guns away, and as for gun laws, forget it.

On the way back to L.A., someone on NPR said, “Just take all the guns away from everyone. Problem solved.” I turned the radio off, saying, “That will never work. They don’t understand the culture.”

Then, the Roses and Bartons came walking out of thin air and told me an incredible story that I had to write down. Since then, people everywhere say that it is more important than ever for this story to be heard.

#2 Draw out the three-act structure map

#4 List objectives, conflicts, arcs, and the main message to send

#6 Get a rough draft hammered out

#8 Have proofreaders take the journey

#9 Listen to suggestions and be willing to change

I would have to say Steven Knight and Vince Gilligan are incredible writing influences. Their flawless realism in relationships, dialogue, details, and setting is tough to critique. Janusz Kaminski and Martin Scorsese have filmmaking styles that simply can’t be matched. Their work mesmerizes me.

I absolutely adore The Lord of the Rings series. Fantasy has never seemed so real, and the characters are unique, interesting, and enticing.

My favorite cinema moment is the scene where Gigot forcefully tries to speak to the little girl, Nicole, but cannot utter his thoughts or emotions and explodes with frustration.

Jackie Gleason, of course. He was brilliant.

I would love to chat with Meryl Streep about her experiences starting out in the business in the 70s. It was such an incredible time in American history and American cinema.