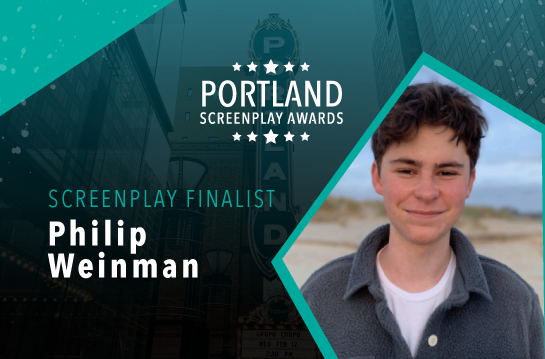 My name is Philip Weinman. I was born in Portland, Oregon and I’ve lived here for all 18 years of my life, but I’ll be going down to the Southern California for college soon. Aside from writing, I love soccer, running (in the rain specifically), photography, music, and of course watching and talking about movies and TV shows.

My short began as a feature length screenplay that I started about a year ago. I spent six months off and on between school refining and editing it, and then left it for a couple of months until this January, when the career counselor at my High School told me about some film competitions to enter. But all of the script competitions were for shorts, of which I had none, and there was only five days left until the final deadline of the Portland competition. I had no fresh ideas to write about, so I decided to revisit my feature and condense it. I knew I wanted to focus on the relationship between two specific characters I wrote, so I started by excising scenes from the longer script that they were in together, but as I cut and pasted them together in various ways, it just felt wrong. The scenes weren’t meshing like I thought they would. So I closed out the file in Final Draft and just rewrote the script from memory (in retrospect I thank myself profusely for doing this). As I wrote, the characters branched off into new directions and took on different forms. Rewriting from memory also helped me shed off all of the excess parts of the original script that weren’t as important to me, and I was able to cut the story by over 60 pages. This first draft took a day, and the final four nights after school were spent doing edits and asking some friends for advice on specific scenes.

The end result was a shorter, more focused script that bore tonal resemblance to the feature but was essentially its own story in the end. So depending on how you look at it, this script either took one year or five days to write.

Whenever I observe or think of something that I find compelling for a film/setting/ character, I write it in a notes folder on my phone. The basis for all of my scripts usually starts in that folder; sometimes I’ll use an actual plot that I wrote down, but more often than not it’s just a scene, a character, or one funny line of dialogue that helps plant a seed for a story. But before I run with one of these ideas, I like to really figure out my main character. I’ll usually write a scene for them that’s exaggerated and heightened (for my main character in this script, I wrote a scene where he tries to clean his flooding bathroom). This approach allows me to flesh out my characters efficiently because it’s usually in the most ridiculous of scenarios that I can dig out their true personalities. When I feel comfortable with my character and the tone I’ve established with them, I scrap the scene in the next draft; I’ll use it as my guide for my character and maybe their setting, but it serves no purpose in the actual story. Then I try and create an outline and write the first draft as fast as I can, usually in less than a day. The first draft is always very, very bad, rarely coherent, and chock full of spelling errors, but then I have a really solid framework that allows me to go back in and strengthen the piece. And sometimes if I identify specific scenes in the outline that are pivotal and carry lots of importance, I’ll write them in depth before I start my first draft. I don’t consider much of what I do actually “writing,” I think of it more as editing an outline over and over and building up the layers from there.

During quarantine, it seemed like every movie I was looking forward to seeing in theaters got pulled from the release schedule. So I tried to make up for my lack of new movies by reading some scripts. And as soon as I read the first one, everything clicked. It’s cliche to say but it did feel like everything fell into place in my brain. The writer was able to create a deep story on the page but also tie in visual elements in such an amazing way. Right after I finished reading it, I knew I wanted to be a screenwriter. I got to combine two art forms I loved so much: writing and film — it was such a no brainer I was surprised I hadn’t thought of it sooner.

I have far too many influences to list just one. Greta Gerwig and Lulu Wang are two filmmakers whose styles — both in terms of writing and directing — I really admire and connect with. But the writer I identify most with is Phoebe Waller-Bridge, the creator of Fleabag. She’s most famous for television, and I prefer writing more on the movie side of things, but two of her quotes have guided me in everything I write. I’m not going to try and remember (and butcher) her exact quotes, but I’ll paraphrase them. Her first: open your audience up with comedy, and when they’re at their weakest, punch them in the gut with drama. And her second: in order to create a truly funny scene, there should always be at least three things going on. I think both of these pieces of advice are pretty simple, but also incredibly helpful and essential, especially when writing a mix of comedy and drama.

I think I become obsessed with nearly everything I watch — I’m pretty easy to win over. But one TV show that I’ve been especially enamored with lately (and will be forever) is Hacks on HBO Max. The structure is impeccable, so it’s so easy to just rewatch it all over again. On top of that, the characters are hilarious and perfect, the acting is amazing, and the writing is so sharp. But my favorite thing about it is that despite being a comedy show, it embraces its heavier, more emotional moments wholeheartedly and balances them seamlessly with the lighter ones. It’s also beautifully shot which I feel like I don’t see all that often with comedies. I can’t recommend the show enough.

[Spoiler warning]: my favorite moment in cinematic history is in Arrival when we find out that the “flashbacks” we’ve been witnessing for the past hour are actually glimpses into the future. It’s one of those twists that completely changes the movie you think you’ve been watching. A runner up is the airplane scene from Bridesmaids which I think is the most I’ve ever laughed in a span of ten minutes.

Edna Mode from The Incredibles. Hands down. It’s hard to explain why she’s my favorite because it’s such a no brainer, but I think she is so distinctive and unique that no writer one will ever be able to create someone even close to her (and I don’t think anyone even wants to try because she’s so perfect). That’s pretty cool to me.

I’m afraid of time travel so I’d probably just stay in this era and ask Meryl Streep about her favorite movies.