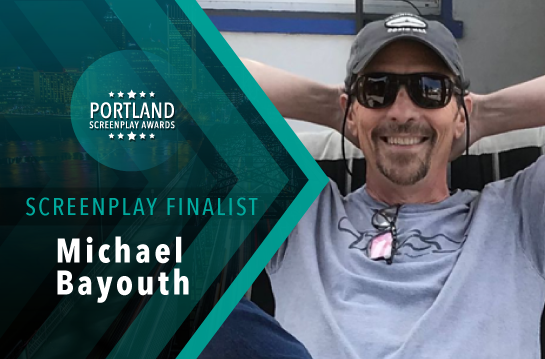 My name is Michael Bayouth, I was born in Oklahoma City, and now live in Portland, Oregon. I enjoy creating art, magic, filmmaking, and writing.

2 years ago when Covid hit, I started writing CornStalkers. It was Halloween time and all of those images of cornfields, scarecrows, spiders, and ghosts were in my head. I added the final ingredient of hot rods as something out of the ordinary. After my adult children responded positively to it, which is not the usual case, I realized there might be something there and developed it into a feature screenplay, which took me about 2 ½ years.

My wife had just given me Masterclass for Christmas, so I immersed myself in Dan Brown and Aaron Sorkin and started writing down an outline of everything I knew about the story even if it wasn’t in the right order. I made 4×5 cards. I conceived of scenes that were stand-alone scenes, not knowing where they would fit. My brain started to put things together while I slept, and I felt like a plot was emerging. Valued feedback from my wife and trusted friends throughout the process was invaluable.

Once I had a protagonist that I cared about and a antagonist that I hated, the writing picked up momentum. After I finished my first draft, I was so excited. No one could stop me from prematurely entering it in film festivals with not much success. In hindsight I can see where I cut corners and made compromises because I was too eager. I went back to the drawing board and started the rewrite process. The second draft is where I am now, and I couldn’t be happier.

I’ve been writing scripts for years, but it’s only been recently that I’ve challenged myself and have taken myself seriously as a screenwriter. I’ve always been a storyteller, whether through acting, art, filmmaking, or writing.

William Goldman, Aaron Sorkin, Steven Spielberg, and Richard Christian Matheson. They trick me, fool me, freak me out, make me laugh, and they make me cry. They know how to pull the heartstrings and always surprise me when I didn’t see it coming. Aaron Sorkin’s advice about how screenwriting should sound like rhythm had a big impact on me and my writing. Richard Christian Matheson’s advice on how to handle mystery was a real paradigm shift for me. Moving the human emotion is not easy and these four set the bar and inspire me to do the best I can.

The Man Who Would Be King and My Favorite Year. Drama and Comedy. The epitome of two great genres. The plotting and characters in The Man Who Would Be King are unmatched. The story is truly inspired, and the enormity of this epic production sweeps me away. My Favorite Year charms me every time I watch it. Its characters and comedy are brilliant and the writing has influenced my vernacular to this day.

In Poltergeist when they bought in the pint-sized psychic, my eyes well up every time she gives her speech. “Now let’s go get your daughter.” The reason it’s my favorite is because of the direct connection between character and structure.

Chevy Chase’s character in Christmas Vacation was so endearing – you just love him. No matter how much seems to go wrong in his world he’s always trying to make it right.

I’d love to talk with Rudyard Kipling and share an evening of conversation with him.