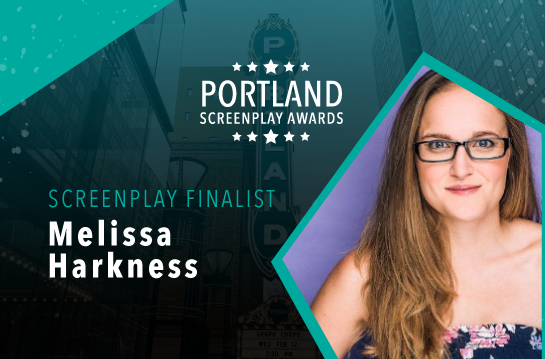 My name is Melissa Harkness, and I was born in Pensacola, Florida, though I spent most of my childhood in Memphis, TN. I currently live in Los Angeles, California. A hobby I enjoy hugely is golf (I stay sane by not keeping score).

I am, like many people, haunted by the idea of death and loss. The idea of losing someone who is close to me is unthinkable, but also ultimately unavoidable. We are all going to die. I wrote this screenplay to grapple with that fact. I, in many ways, am Arthur, my main character. Like me, he’s a bit of an anxious control freak who loves for things to have an explanation, who doesn’t embrace the messiness of life. This screenplay is his journey to accepting that he can’t control things, that sometimes life just sucks, for all of us, and we have to learn to embrace that. It’s all we can do.

It started as a short film, and a friend of mine read it and said, “There’s so much to explore here- you have to make it a feature.” I’ve been developing it as feature for about a year, and I’m still working on drafts, hoping to get it to the perfect point.

I’m a believer in outlining, so I always start there. It’s not a perfect fit for all screenplays, but I use Blake Snyder’s outline model from Save The Cat. Then I’ll do a draft, see how it works, and if it’s not working, go back to the outlining stage, and then do another.

I’ve always loved acting and the theatre. While in college, I had a professor who started a playwriting festival. I had just had my heart broken by a first boyfriend, and so I decided to channel that into writing my first play, and it wasn’t terrible. I found I really enjoyed writing and continued on with it. I was accepted into UCR’s Master’s program for Playwriting. Their program is really awesome and unique because it’s cross-disciplinary, so you get to take classes in fiction and screenwriting and nonfiction as well as playwriting. I really enjoyed screenwriting and have been doing that as well as playwriting ever since.

I absolutely love Bong Joon Ho. There aren’t many screenplays as tight and as impactful as Parasite. I love that he manages to sock you right in the gut while entertaining you and surprising you. I don’t think a single person in the theatre knew where that was going, and yet we should have. Another is Fran Kranz, who is something of a newcomer. I watched Mass and got instantly jealous. Again, he’s a person who writes about a really difficult topic and isn’t afraid to push into it and explore.

Ha! Have I ever been obsessed? There are too many to name! The Office, Seinfeld,  and Friends were shows I was obsessed with because they always made me happy. Sopranos, Mad Men, and more recently Yellowjackets and Squid Game are shows I was obsessed with because they made me question and think. For movies, Gladiator, The Godfather, The Truman Show, and Star Wars were all ones I’d watch over and over.

There are so many. If I’m put on the spot, I’ll say one that gave me the shock of my life as a young person, and that’s when you discover that Dr. Malcolm Crowe is dead at the end of Sixth Sense. It was such a perfect moment that had been so well set-up and yet somehow no one saw coming.

I’m going to go with Princess Leia from the original Star Wars trilogy. She’s such a tough badass who just has some of the best comebacks in the history of comebacks. “I’d just as soon kiss a Wookie.” Classic.

Going along with the theme of screenwriting, I’d probably want to talk to Frances Marion and see what it was like navigating the early days of Hollywood and why she decided to leave it all behind to be a playwright.