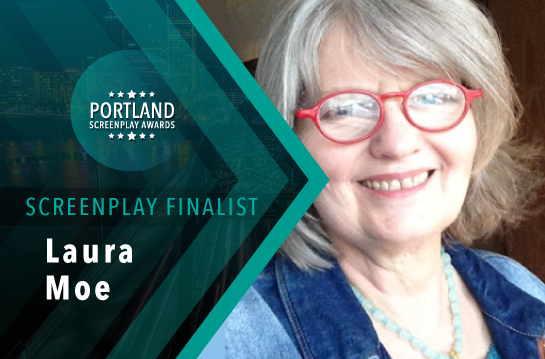 My name is Laura Moe. Sometimes I’m able to convince middle school students Detroit was renamed Motown after I was born there. After moving to many states and a couple of countries, I’ve settled in the Pacific Northwest, currently in Seattle. I wouldn’t call it a hobby, but during the pandemic I took up cooking and have mastered making omelets and grilled salmon.

The script is adapted from my 2016 novel, BREAKFAST WITH NERUDA. Both are conceived from my years as a teacher in Appalachian Ohio. The screen adaptation took about a year and many drafts. A teacher friend of mine hosted a table read of an earlier draft of the screenplay with her many drama class and the kid’s input was invaluable.

My process tends to be chaotic. I block out scenes on post-its on a board and move them around depending on the story arc. Each scene and each act within that scene has an arc, yet the final act needs to deliver a punch with a cliffhanger. I make a lot of mistakes in initial drafts but the real writing begins in revision.

I love movies and TV, and even as I wrote NERUDA’S BLUES in novel form, I pictured it for screen. I weighed between writing it as a film vs. a series, and discovered I can cover more material from the book as a streaming series.

I don’t write anything like him, but I admire Aaron Sorkin. He has a great ability to combine humor and drama by creating well-rounded characters. His work is smart and his dialogue is call and response like jazz notes.

It’s hard to choose just one. I have eclectic taste which ranges from foreign TV and films (Borgen, The Tunnel, Vera, The Lunch Box, Locke,) and American works (The West Wing, MASH, Apollo 13, The Hangover franchise, Better Call Saul) but the one show I’ve seen every episode of is The Big Bang Theory. It’s not perfect—too many colonoscopy jokes, — but it’s consistently funny and often touching.

I love the opening scene of the original WEST SIDE STORY. It’s a high energy way to introduce the viewer to the setting, characters, and the conflict between the Jets vs. the Sharks.

Georgia O’Keefe seems like she’d be a fascinating conversationalist.