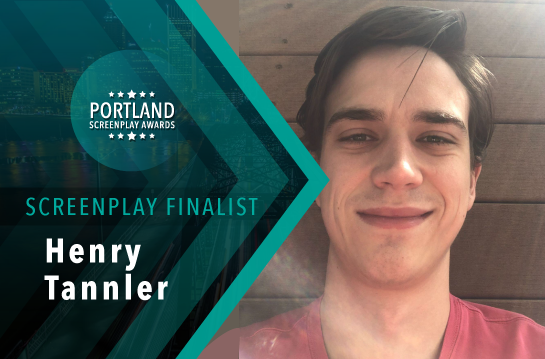 My name is Henry Tannler, and I was born in Portland, Oregon. I have been living in Los Angeles for a year, but Portland is home. My favorite hobby is writing, but I also enjoy hiking, camping, reading and cooking.

I had a dream that I was still living in my childhood home, and for some reason, a random “influencer” that I saw on the internet was also using it as an airbnb. The fact that a random person that I had seen on my phone only a few times could show up in my dreams stuck with me, and the idea snowballed into this story about internet obsession and influencer culture. I also started thinking about how odd and funny it would be if social media influencers actually acted the way they do online in real life, and writing a character that did that felt like a good way to show just how bizarre the internet has become. It took me about 3 months to get a first draft done.

I wish I had an interesting process to talk about, but I really don’t. I do a little bit of outlining, but I never outline the whole story. What’s most important to me is how the first act of the story plays out and how it ends. If I have that outlined, then I feel like I am ready to start writing the screenplay. Sometimes this works out, sometimes it doesn’t. There is just something about outlining that is so boring to me, and I would rather just get to the part that I love. If it’s a good concept and setup with characters that are compelling to me, then it will find its way. I would rather have the story come to me in pieces as I write then have to sit down and try to figure out every single scene at once.

I always liked watching movies and writing, but it took a while for me to realize that screenwriting was an actual job for some lucky people. I didn’t consider it until I saw Rosemary’s Baby and Carrie years ago. These movies really made me want to explore the vast world of film and impacted me enough to actually look into what a screenplay looked like for the first time.

This is such a hard question because there are probably so many at this point, yet most of them are probably subconscious when I’m writing. Just off the top of my head, I’d have to say Alfred Hitchcock, Ingmar Bergman, David Cronenberg, Dario Argento, Nicolas Roeg, John Cassavetes, Edgar Wright, Julia Ducournau, Claire Denis, Joe Dante and Charlie Kaufman are all up there. When it comes to comedic timing in tense situations, Edgar Wright’s scripts are a big influence. The first screenplay that I ever read was It Follows by David Robert Mitchell, so that probably has some influence as well.

I’ve been obsessed with many movies, so it’s hard to pick just one. For the sake of answering the question, I’ll say Shaun of the Dead because I’ve probably watched it more times than any other movie. Each time I watch it there are little jokes or callback moments that I didn’t catch before, which is a sign of a great script that keeps on giving.

The moment in Carrie when she is covered in pig blood and then proceeds to destroy everyone and everything in her way. It’s horrifying and sad but so satisfying because you have to side with her violence at this point in the movie. There’s also a ton of split screen used in this scene, and I had never seen anything like it at the time.

Carrie White and Ash Williams are both some of my favorites. I think that Carrie is the perfect horror anti-villain. Ash is just the most badass and charismatic protagonist that I can think of.

I would talk to David Lynch because he’s basically the weirdest, most interesting director out there. Since he doesn’t like talking about his movies, I would probably ask him about his daily routines and how he stays creative/comes up with ideas.