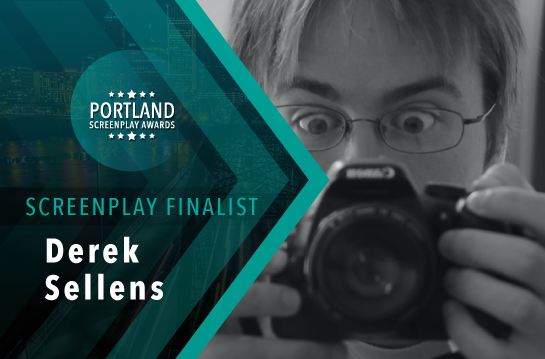 Derek Sellens, Newton Kansas, Emporia Kansas, I am a film editor and visual effects artist with a hobby in screenwriting and concept development.

In high school my buddy Kai and I made short films, one of our more successful ones was titled, “Omegaman”, whom is now the lead character for Welcome to Arkhaven. The concept has been in the back of my mind for over a decade, I kept returning to it with only a handful of ideas, but only recently had the time to craft those ideas into a working concept.

I ask myself, “What is the point?”, “What makes this different?”, “What hasn’t been done a thousand times?”, “Who are these characters deep down?”, “How do their differences derive conflict?” and then I go from there. I try to challenge myself with turning my least favorite part of the screenplay into my favorite part. Never be satisfied with a boring, “how do we get from A to B?” There is always a way to make it interesting.

In high school I began creating short films, from there I became obsessed with filmmaking, over the years I’ve worked every single position across numerous of productions. When our high school film “Omegaman 2: The Foil Menace” won every award at a college level film festival it was a clear sign that I was meant for this.

Trey Parker and Matt Stone, creators of South Park often discuss screenwriting, they work with a four act structure and discuss the importance of the phrase “so that” and ”therefor” instead of “and then”. Never just have things happening, always have one action leading to the consequences of another action. Comedy is best derived from what is happening in a story rather than random happenings.

Peacemaker from Peacemaker. There are a lot of men struggling with the fast passed changes today. Behavior that was appropriate last week is now a severe enough issue that you could lose your job. This has left a lot of men who appreciate “tradition” feeling scared and confused. Peacemaker is one of those men trying to be the best man that he can be. Throughout his series we learn who he is and why he behaves a certain way and we watch him learn to change to be a better hero of today. By the end of the story he is a different man.

Stories that showcase important struggles that affect our modern culture are extremely important. This series very much addresses the fears and struggles leading to violence today. It is also most important that these stories reach people in a positive way, crafted into a fun story that teaches the audience without condescending or punching down on them. Peacemaker shows these stubborn men that they can participate in the future.

Lucille Ball, her life story was nuts and she seems nuts. No doubt a fun conversation with a significant amount of classic Hollywood gossip as well as her unique position of being the most powerful woman in Hollywood for the 1950’s. She discovered a Japanese spy be hearing radio signals through her cavity fillings, and she helped to greenlight Star Trek, what else would she have to say?