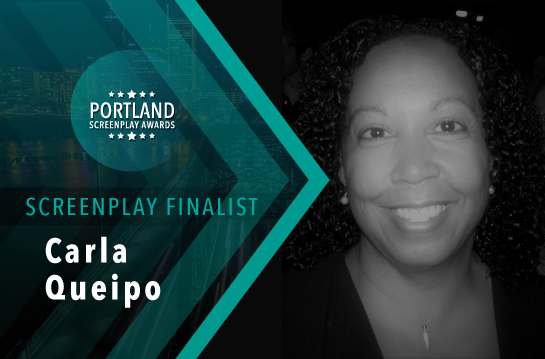 Carla Queipo (pronounced K-Po). I was born on Bentwaters, Air Force Base, near Woodbridge, Suffolk in England. I live in the Pacific Northwest. My hobby is fly-fishing.

As a child watching the news, I realized despite their being Union stakeholders that there were places like Boston far from the deep south where racism/segregation still existed. I wanted to create a drama where a white protagonist was forced into a situation far from his comfort zone and where he must confront his bigoted beliefs.

I began my outline and treatment in January 2021 and submitted the spec script of my first draft for review on January 30, 2022.

Due to my working a 40-50 hour/week job, time for research and writing is limited to afterwork hours – usually between 10 pm and 4 am. I start with an outline. Music is my muse and motivator. I put on my headphones, pull up my script playlist, and do my best to write without seeking perfection or losing too much sleep. I research as I write and as I find bits of information that may relate to

other beats, I place the links in a script note for later reference. I’ll admit I was so happy to finally be through my initial draft that I used screenplay contests for feedback – adding reader reviews to most of my submissions. And when more than one analyst identified a concern with my current draft, I’d revise when/where I could and resubmit.

As early as middle school when I saw the movie To Kill A Mockingbird on TV and then read the book. I knew then I wanted to write a screenplay or adapt a book into one.

Sorkin, Kaufman, Cody, and Peele. Their dialogue, wit, structure, and tone culminate into an ability to transport you into their characters’ world, to make you care about what happens to them, and to keep you thinking about those people long after the credits roll.

To Kill A Mockingbird; it was my coming-of-age movie.

“You can’t handle the truth” Well-written, well-acted, and regardless of the number of times I watch that classic courtroom confrontation scene, it still gives me goosebumps and motivates me to be a better writer.

The character Walker in The Man is my tribute to Atticus Finch because of his calm, quiet presence, his ability to stand his ground, his loving demeanor as a father, and his commitment to do what was right, despite the pressure from his community to back down.

As self-serving as this response is I’ve thought about it too many times to let the opportunity pass. President Obama (and Mrs. O), would you please consider my screenplay for your Higher Ground production company? 😉