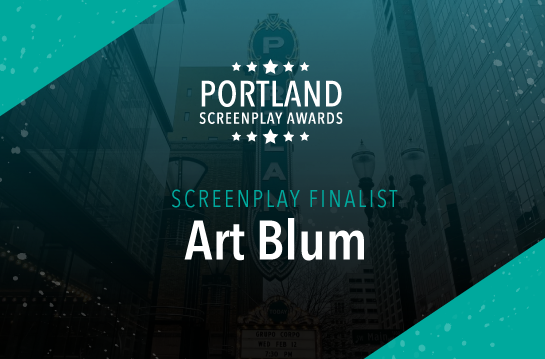 Art Blum. Born in Chicago, Illinois. Live in LA. My hobby is writing.

I was writing another screenplay about a young career woman who has inherited trauma. She dreams about this other woman from a past time and all the trials and tribulations she went through. And then I realized this character she dreams about had a compelling story in its own rite. So, I wrote a separate short story about her.

I saw this story in my mind and wrote an outline and then a first draft. The process is never ending. I still do rewrites.

One thing that helped is I went through the script and found 4 or 5 scenes where the main characters discuss what really matters to them. The dialogue amounted to a few throwaway lines. I separated these scenes from the script and turned the discussions into heated arguments. What developed was I discovered what mattered to me and the real reason I was writing the story. I went through the script again and revised it so the entire thing reflected my feelings about the story.

A long time ago I saw a film called “I Never Sang For My Father.”  It starred Melvyn Douglas and Gene Hackman. It’s about a father-son relationship. It rang true to me as there are similarities between that film and my life. I wondered if I could ever write anything that could evoke that much emotion. I don’t think I ever came close but that’s my early inspiration.

There are many. Here are two. I like Mel Brooks, The Producers, etc. He takes on tough issues like greed and racism and shows them in a humorous way. I like Paddy Chayefsky, Network, and Altered States. He has a dark sense of humor and gives the viewer a broader perspective on life.

One I enjoy is “Once Upon a Time in Hollywood.” It’s not Tarantino’s best movie but I really like the relationship between Brad Pitt and Leonardo DiCaprio. I like how they genuinely care for each other and how they enjoy going out of their way to help each other. Since the film is episodic, you can watch a few favorite scenes and be satisfied.

Godfather II, when Vito returns to Corleone and kills the guy who killed his mother. It was justice and I loved the De Nero parts of the movie.

I would like to talk to my grandfather (died in 1955) and ask him what prompted him to leave Russia, how he got out, etc. When I used to think about what I’m grateful for I used to think my health, I have a good job, and so on. But since the war in Ukraine I realize I’m especially grateful for my grandparents leaving Russia.