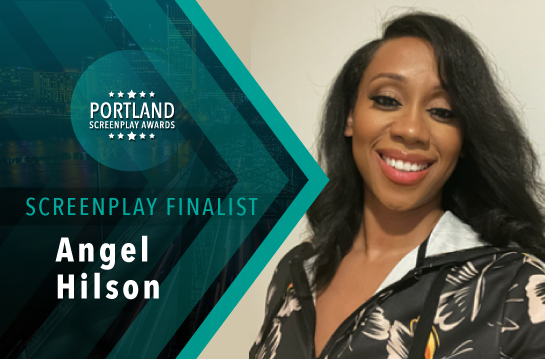 My name is Angel Hilson, I was born in Milwaukee, WI. I currently reside in Atlanta, GA and I love writing, singing and writing songs.

Watching the news and seeing horrible people get away with horrible things, I sort of thought, what if? What if we had a bad ass that went around judging horrible, untouchable people and serving them their karma? The idea for E.L.I. (Extended Life Individuals) comes from the need for justice.

I wanted to take that concept and write something that was fun and weird and quirky. It was inspired by shows like Lucifer and American Gods. I like how these shows take concepts we’re set on. We know the Bible; we know the story of Lucifer’s fall. Right? Wrong. What these shows do is say, hey, here’s the real story, the inside truth that only a few are privy to and now you the audience, get to hear it too. And that’s what I wanted to do with E.L.I. I wanted to take what we think we know about Greek Mythology and the Sisters of Fate and turn it on its head.

It took a total of 3 months from concept to final draft. I had a lot of fun writing it.

An idea will come to me, and I’ll go on with my day. If it continues to show up, I’ll know it’s something I should pay attention to. I’ll mull over the idea day and night, adding details as they come. I’ll look for the hook, the twist. I’ll ask myself, what makes my idea different from anything I’ve ever seen? What makes it unique? Once I find that, I build a story around it. Once I feel I have a juicy enough nugget, I’ll create an outline plotting all important points in the story. When I know the ending, I begin writing. After completing a first draft, I’ll step away for a few days, return and re-write adding details and fleshing the story out. I continue this process until I have a full first draft. Then the editing, rewriting process begins.

I learned that Atlanta was a hub for film and television, so when I moved here, I wanted to learn how I could get a film made. At the time, I saw that a ton of movies were getting made from IP, such as books, articles, comics and such. So I decided to create my own IP. I wrote a book and partnered with Wattpad, a social reading site with over 90 million monthly users, to publish it online. I gained a following and my book series has earned almost 2 million reads on the platform. I’ve written two books and am working on a third. But I wanted a quicker path to seeing my work on the big screen, so I taught myself to write screenplays. In this last year, I’ve written a short and two one-hour pilots. The short is doing well with placements in 6 film festivals and 8 screenwriting competitions. The pilots were recently completed, and I’ve started entering them into competitions as well.

As an emerging television writer, I’m inspired by both Shonda Rhimes and Neil Gaiman for vastly different reasons.

Shonda Rhimes inspires me because she is a woman of color making her mark in television creating amazing shows that people just can’t stop watching. She knows how to grip her audience emotionally and keep them coming back. She is an unstoppable powerhouse who the industry respects. Her work is anticipated, celebrated and talked about.

Neil Gaiman inspires me because his work stretches the imagination. The fight scene in Sandman between Dream and Lucifer is a great example of this. Who would’ve ever suspected the fight would be a war of ideas? He’s brilliant and entertaining and his work is inclusive and diverse.

I’d love borrow their diversity of cast, which I aspire to have in all my screenplays and the addictive essence of the shows they both create.

This is probably going to be the last movie anyone would expect, but Jerry Maguire was a movie I would watch repeatedly. I watched it a lot. I could never get tired it. The storyline and the characters couldn’t be any more different than who I was at the time. I was no professional athlete, I didn’t have an agent, I wasn’t working in a corporate environment. I was a college kid trying to figure it out. But there was something about watching a guy stand up for his morals, quit a super successful job and find himself at rock bottom with a bitter, underperforming client that just spoke to me. It was the journey to success, to get back and become better that drew me in. That movie showed me that underneath it all, we’re all a lot alike, dealing with similar situations and just trying to stay afloat and live a good life.

I loved seeing Jordan Peele win an Oscar for Best Original Screenplay in 2018. He was the first black person to accomplish this. It’s very encouraging and inspiring.

Tracy Ulman’s character, Frenchy, from Small Time Crooks is a fun character. In the movie, her husband, Ray, concocts a plan to open a cookie shop as a front while he attempts to tunnel through a wall into the bank next door. The cookie shop takes off in a big way, but the bank heist fails horribly. It’s fun to watch how optimistic and cheerful Frenchy is as this attempted crime is taking place right underneath her. She’s funny and lighthearted. Her ever-sunny disposition paves the way for their success.

Josephine Baker. I’d ask if as a child living in poverty, did she ever dream she’d make it as big as she did, the most famous performer in all of France.